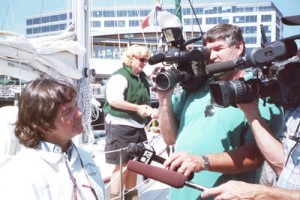 The first day twelve-year-old Nancy Erley learned to sail, she knew what she wanted to do for the rest of her life. From an Ohio girl scout sailing unit, Nancy went on to Mystic Seaport youth mariner programs, inter-collegiate racing and the purchase of her first sail boat in 1975. She was in college when she first lived aboard full-time and then, working in Seattle bought her second boat, the 36-foot 1927 Blanchard Standard Cruiser, Faun.

When she decided she wanted to sail around the world, she chose Tethys and three friends joined her as financial owners of the boat. As captain, Nancy completed her US Coast Guard 50-ton Master of Oceans & 100-ton Master Near Coastal licenses, Advanced Ham radio license Ki7dp, ISPA Instructor Evaluator Ocean and PADI advanced SCUBA. After the first circumnavigation in 1995 Nancy bought Tethys from the other owners and started teaching women full-time. For nearly 40 years, she has shared her love of boats and sailing with other women- as teacher, advocate and international public speaker.

Nancy Erley led two voyages from Seattle around the world aboard her Orca 38 sailboat, Tethys. “As the skipper of an all-woman crew, Nancy fashioned a circumnavigation that should go down in the record books as one of the soundest, most seamanlike journeys in the modern cruising era. Like all competent voyages, Tethys circumnavigation was notable for its lack of disasters.” George Day, publisher Blue Water Sailing magazine. 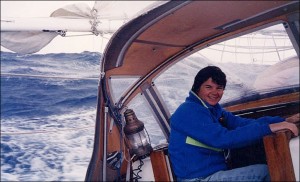 After the first circumnavigation in 1995 Nancy bought Tethys from her partners and started Tethys Offshore, teaching women sailing full time. For nearly 50 years she has shared her love of boats and sailing with other women, as teacher, advocate and international public speaker.

In 2006 Nancy was presented with the Leadership in Women’s Sailing Award sponsored by BoatUS and the National Women’s Sailing Association. The award honors a male or female who has built a record of achievement in inspiring, educating and enriching the lives of women through sailing.

In addition to teaching women sailing aboard Tethys, Nancy holds a yacht salesperson license and acts as a buyer’s representative to find the right boat for each individual. “The truth is that I just love boats,” admits Nancy Erley. And if you stand within earshot or her sea stories, you will begin to believe you love boats.